To our honourable community and fellow art collectors,
May G-d bless our greater community to embrace Edel's "Artidote" project
as his art aspires to illuminate our homes with  happiness and  joy.

We thank Ted Chernecki of Global News
for encouraging Mordechai Edel
to counter tragedy and darkness with the "Artidote " idea
after interviewing Edel regarding his life changing story.

In recent years Edel and his wife were bilked of
the majority of their life savings totalling $500,000
as a result of a malicious felony
by a well known "highly recommended"
government licenced  financial advisor.

Although it may seem that the Edel's earthly lives
have been ruined Mordechai believes that
the Almighty has challenged his paintbrush
to bring blessings in disguise through his  "Artidote " project
to elevate passionate optimism, joy and happiness not just
for the Edels and their supportive art collector clientele
but most importantly to bring light & joy to people
who G-d forbid may struggle to survive with  far worse situations.

In some remarkable way of  faith the Edels believe that
the $500,000 stolen from them
must only be an investment for the good !!!

Ted Chernecki inspired the Edels to move forward
and embrace life
with the gift  of art that G -d gave him !
=======
Dear friends and collectors of fine art, although today’s
economy presents a formidable challenge ,
to paraphrase the Beatles and former Prime Minister Harper,
"With A Little Help From My Friends " ,
together we may all be uplifted.
As a result we invite you and friends
to share this opportunity to commission a work of art
​or host a private art reception
to share the joy and blessings of Edel's amazing fine art.
======
In return for participating in Edels “Artidote” project
Mordechai prays that the Almighty bless you and yours
​with abundant good news, health and happiness
and look forward to hearing from you very soon.
Mordechai may be contacted via his website
​www.edelartworks.com 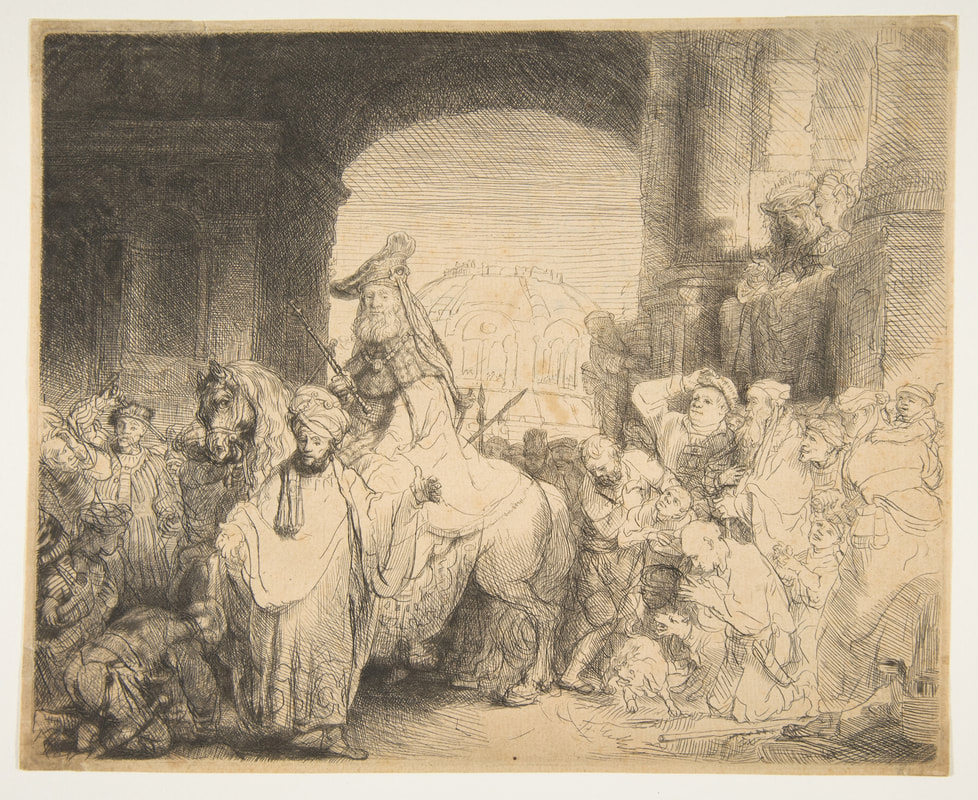 The Beauty of Holiness
or
The Holiness of Beauty

Vayakhel 5779
​
In Ki Tissa and in Vayakhel we encounter the figure of Betzalel, a rare type in the Hebrew Bible – the artist, the craftsman, the shaper of beauty in the service of God, the man who, together with Oholiab, fashioned the articles associated with the Tabernacle. Judaism – in sharp contrast to ancient Greece – did not cherish the visual arts. The reason is clear. The biblical prohibition against graven images associates them with idolatry. Historically, images, fetishes, icons and statues were linked in the ancient world with pagan religious practices. The idea that one might worship “the work of men’s hands” was anathema to biblical faith.

More generally, Judaism is a culture of the ear, not the eye.[1] As a religion of the invisible God, it attaches sanctity to words heard, rather than objects seen. Hence there is a generally negative attitude within Judaism towards representational art.

There are some famous illustrated manuscripts (such as the Bird’s Head Haggadah, Bavaria, circa 1300) in which human figures are given bird’s heads to avoid representing the full human form. Art is not forbidden as such; there is a difference between three-dimensional and two-dimensional representation. As Rabbi Meir of Rothenburg (c. 1215–1293) made clear in a responsum, “There is no trespass [in illustrated books] against the biblical prohibition…[illustrations] are merely flat patches of colour lacking sufficient materiality [to constitute a graven image].”[2] Indeed several ancient synagogues in Israel had quite elaborate mosaics. In general, however, art was less emphasised in Judaism than in Christian cultures in which the Hellenistic influence was strong.

Positive references to art in the rabbinic literature are rare. One exception is Maimonides, who says the following:
If one is afflicted with melancholy, he should cure it by listening to songs and various kinds of melodies, by walking in gardens and fine buildings, by sitting before beautiful forms, and by things like this which delight the soul and make the disturbance of melancholy disappear from it. In all this he should aim at making his body healthy, the goal of his body’s health being that he attain knowledge.[3]
The very terms in which Maimonides describes the aesthetic experience make it clear, however, that he sees art in strictly instrumental terms, as a way of relieving depression. There is no suggestion that it has value in its own right.

The strongest positive statement on art of which I am aware was made by Rabbi Abraham ha-Cohen Kook, the first Ashkenazi Chief Rabbi of (pre-State) Israel, describing his time in London during the First World War:
When I lived in London, I would visit the National Gallery, and the paintings that I loved the most were those of Rembrandt. In my opinion Rembrandt was a saint. When I first saw Rembrandt’s paintings, they reminded me of the rabbinic statement about the creation of light. When God created the light [on the first day], it was so strong and luminous that it was possible to see from one end of the world to the other. And God feared that the wicked would make use of it. What did He do? He secreted it for the righteous in the world to come. But from time to time there are great men whom God blesses with a vision of that hidden light. I believe that Rembrandt was one of them, and the light in his paintings is that light which God created on Genesis day.[4]
Rembrandt is known to have had a special affection for Jews.[5] He visited them in his home town of Amsterdam, and painted them, as well as many scenes from the Hebrew Bible. I suspect that what Rabbi Kook saw in his paintings, though, was Rembrandt’s ability to convey the beauty of ordinary people. He makes no attempt (most notably in his self-portraits) to beautify or idealise his subjects. The light that shines from them is, simply, their humanity.
It was Samson Raphael Hirsch who distinguished ancient Greece from ancient Israel in terms of the contrast between aesthetics and ethics. In his comment on the verse “May God enlarge Japheth and let him dwell in the tents of Shem” (Genesis 9:27), he observes:
The stem of Japheth reached its fullest blossoming in the Greeks; that of Shem in the Hebrews, Israel, who bore and bear the name (Shem) of God through the world of nations…Japheth has ennobled the world aesthetically. Shem has enlightened it spiritually and morally.[6]
Yet as we see from the case of Betzalel, Judaism is not indiﬀerent to aesthetics. The concept of hiddur mitzvah, “beautifying the commandment,” meant, for the sages, that we should strive to fulfil the commands in the most aesthetically pleasing way. The priestly garments were meant to be “for honour and adornment” (Exodus 28:2). The very terms applied to Betzalel – wisdom, understanding and knowledge – are applied by the book of Proverbs to God Himself as creator of the universe:
The law and the Lord founded the earth by wisdom;
He established the heavens by understanding;
By His knowledge the depths burst apart,
And the skies distilled dew. (Proverbs: 3:19–20)
The key to Betzalel lies in his name. It means “In the shadow of God.” Betzalel’s gift lay in his ability to communicate, through his work, that art is the shadow cast by God. Religious art is never “art for art’s sake.”[7] Unlike secular art, it points to something beyond itself. The Tabernacle itself was a kind of microcosm of the universe, with one overriding particularity: that in it you felt the presence of something beyond – what the Torah calls “the glory of God” which “filled the Tabernacle” (Exodus 40:35).

The Greeks, and many in the Western world who inherited their tradition, believed in the holiness of beauty (Keats’ “Beauty is truth, truth beauty, that is all / Ye know on earth, and all ye need to know”).[8] Jews believed in the opposite: hadrat kodesh, the beauty of holiness: “Give to the Lord the glory due to His name; worship the Lord in the beauty of holiness” (Psalms 29:2). Art in Judaism always has a spiritual purpose: to make us aware of the universe as a work of art, testifying to the supreme Artist, God Himself.

Shabbat Shalom.
p.s. "Only G-d creates , the rest of us just copy"....Michaelangelo 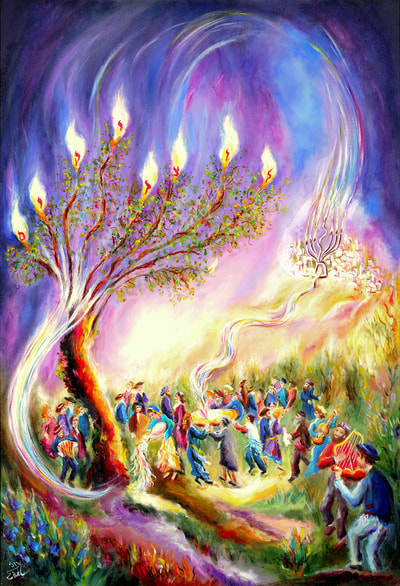 The 36 Lamed Vavnicks of Light 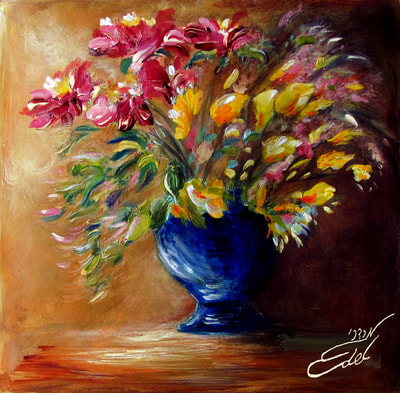 Bouquet in a Blue Vase 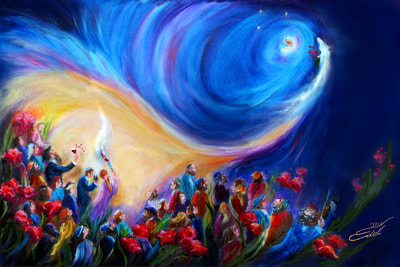 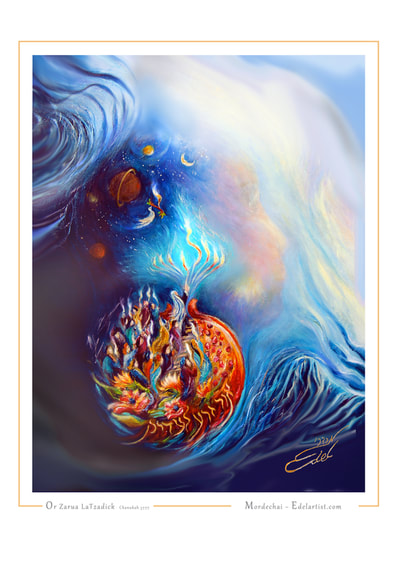 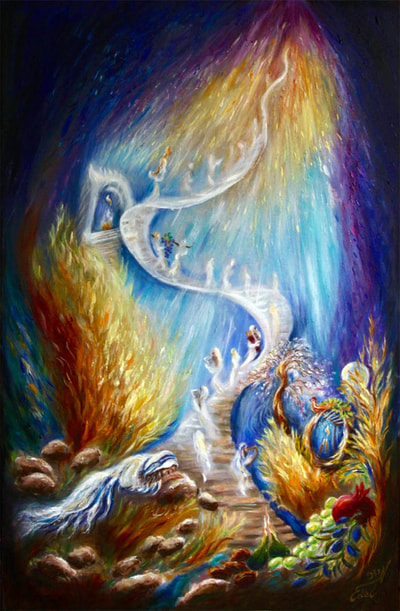 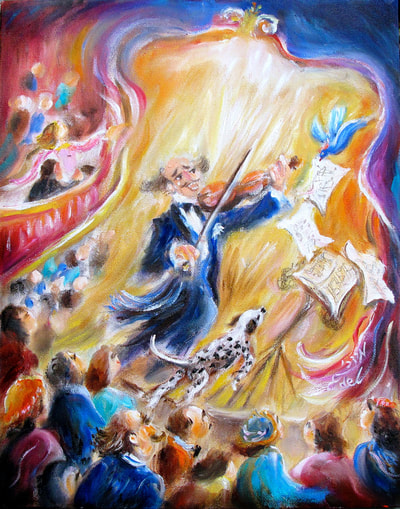 Gone with the Bird 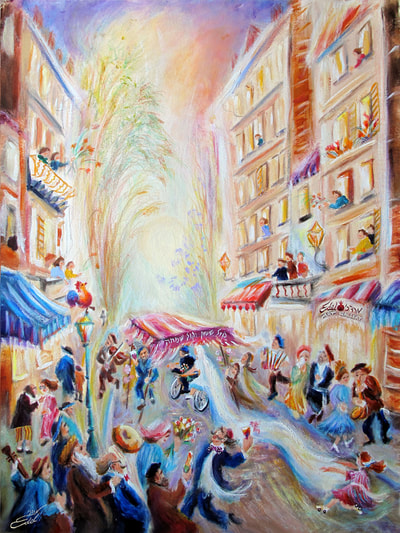 Holy Rollers
Would you like me to paint a repro of one of
my Original oil paintings for you ?
Comes ready to hang with
​ a signed Certificate of Authenticity.

As gratitude I pledge 10% of profit to be donated to charity .
PLEASE CONTACT ME HERE for more information
~
​

An illuminating Chanukah artwork for all year around
We all have stories, symphonic tales to tell,as in music ,some written in  minor,some major .  some beg to be told , taking us down into murky depths while other valuable Words of Wisdom may  elevate us beyond eternity and yet return us to face the challenges of our own unique stories.We all have our own unique stories, so why be attracted to others ? Indeed , what is it that arouses one's soul to   experience the Essential Essence of an Edel ? Could it be that in attempting to solve that esoteric mystery one's soul continually journeys on the map of infinity forever searching and escaping yet always returning to the comforting mirror , the Artidote that is  one's true home . Maybe to experience and visualise  an Edel Work of Art arouses one's desire to acquire the passion of an ideal abode .   p,s. from Rav gisburgh ... Amen = Omanut /artist  from Emumah faith in Hashem's guidance/creation ... emunah = IMMUNE !

"The primary talent of an artist is his ability to step away from the externalities of the thing and, disregarding its outer form, gaze into its innerness and perceive its essence, and to be able to convey this in his painting. This is how an artist can serve his Creator."  ​
Rabbi Menachem Mendel Schneerson, the Chabad-Lubavitch Rebbe
"  Mordechai Edel's oil paintings will enchant  your home with sublime therapeutic energy !  Take an  Edelartwork home with you today , you will be so glad you did ! "... Grace McCarthy OBM